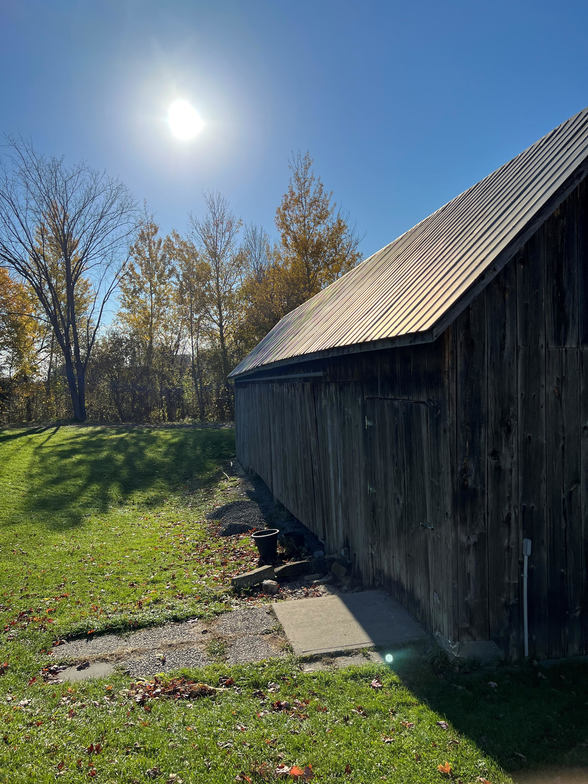 We acknowledge that our parish is situated on the traditional and unceded lands of the Algonquin Anishinaabe, who have been the guardians of this land for thousands of years.

The history of our parish is tightly interwoven with that of the surrounding March Township and its early settlement and social geography – especially with the life stories of the adventurous settlers who first began to populate what were then, two centuries ago, dozens of square kilometres of forests, rocky meadows, fields and wetlands.

Migrations from Ireland and England

The original wilderness of present-day Eastern Ontario and the Ottawa Valley – more specifically for our purposes the lands on the banks of the Ottawa River, extending several kilometres inland just west of Ottawa – first began to be settledbetween the end of the War of 1812 and about 1819. This territory came to be known, after being laid out and surveyed in 1820, as the Township of March.

Many of the very earliest settlers were relatively well-to-do former military men – both officers and Irish and English soldiers, who had recently been discharged or disbanded from units of the British Army. Following them in subsequent decades were more Irish, Scottish and English migrants. These folk faced the discomforts and dangers of weeks at sea in their common desire to re-establish themselves in a new land, many driven by the crushing realities of the poverty, famine, and overcrowded and overworked cities and farmlands they were leaving behind.

The majority of newcomers to this part of Ontario in the early to mid-1800s certainly tended to be Irish. Settlers eager to begin cutting and selling timber from the extensive forests, or clear acreages for farming, were promised free land by the Crown as a reward for military service, or later on simply received it without strings attached under continuing British Government programs to provide land to emigrants at little or no cost.

Soon, small communities began to take shape. And a growing community had to have a church: it was a matter not only of local pride, but of maintaining a sense of connection and continuity with faith and other traditions left behind … in the old country.

As noted above, before the first St. Mary’s Anglican Church was built in 1828, there had been considerable controversy between, on one hand, the 'inland' settlers – those who lived well away from the Ottawa River – and, on the other, the more prosperous riverfront population. Each group wanted the new church built closer to where they lived: it was a matter of both community pride and practical ease of access to have the church building nearby.

While the wealthy Hamnett Pinhey (1784-1857) had resolved the dispute by paying the tab for the first St. Mary’s to go up on his riverfront estate (now Pinhey's Point Historic Site), the matter of better serving the considerably larger inland population came up again when St. Mary’s applied around 1834 to the then Bishop of Quebec for formal consecration of their building as a House of God. The higher church authorities agreed to consecrate St. Mary’s – but only on condition that a second church soon be built inland – closer to the geographic centre of March Township.

That second church was to be known as St. John’s, South March – which stands today as not only the largest Anglican church in the original March Township area, but also one of the oldest churches of any denomination in the Ottawa Valley.

The cornerstone of St. John’s was laid July 22, 1839, along with that of the parish’s next-door parsonage – which was to become known in its early days as the ‘Eisdale Rectory’.  This rectory sits right beside the church and was somewhat celebrated in the history of both the parish and the Township for the fact it boasted no less than five fireplaces. Far from being inappropriately ostentatious or luxurious, however, these multiple fireplaces met a real need – especially in pre-electricity days. They kept warm and cozy many a visiting clergyman, church dignitary or other parish guest of the type the priest and his family were typically expected to house for overnight stays during the long, cold rural winters before the advent of electric heating or oil and gas furnaces.

The first service in St. John’s is recorded as having occurred on April 15, 1840, with the marriage of two local people – William Hedley and Bridget Younghusband – conducted by the Rev. W.F. Stuart Harper. (William went on to serve from 1866 to 1868 as St. John’s warden. William and Bridget are buried in the church cemetery.)

While regular use of the church had so begun in 1840, the title to the St. John’s site did not become secure in the hands of the Church until 1849 – following a reportedly ‘complicated’ series of land transactions and ownership changes involving its original donor and a series of other parties.

It is reliably reported that one particularly notable figure from mid-19th-century Canadian church and political history – namely the prominent educator, bishop and leading player in the Upper Canadian 'family compact', the Honourable and Right Reverend John Strachan, visited St. John's and St. Mary's churches during an early tour of this entire Diocese in 1840. (Strachan, considered to be the father of public education in Ontario, had just become the first bishop of the newly created Diocese of Toronto in 1839 and served in that capacity until his death in 1867.)

However, as an Anglican church cannot be formally consecrated until it is completely debt-free, it was not until July 3, 1896, that St. John's, South March, finally saw its long-awaited service of consecration conducted by the bishop of the new Diocese of Ottawa, the Right Reverend Charles Hamilton.

It is interesting to note that a key mechanism for funding churches built around the same time was the 'sale' of particular pews to subscribing members: if you sat closer to the front, you would pay more for your pew. Of course, the now-ubiquitous collection plate some time ago displaced this fundraising method. (More recently, there are preauthorized monthly automatic remittances from supporting parishioners’ bank accounts.)

Immediately adjacent to the church and rectory buildings, our cemetery reflects the long history of both the parish and its neighbouring township, being the final resting place of many builders of both secular and church communities through the decades since the 1840s, including many of the parish’s clergy. Beautifully maintained, with both a labyrinth and a quiet garden on its fringes, it is framed by majestic overarching trees, whose branches provide both shade and, annually in the fall, a glorious blaze of rich colors to warm the heart and lift spirits heavenward.

Making good use of their spacious and beautiful church grounds, the people of St. John’s are recorded as having held one of their first lawn social events in May 1923. That tradition has evolved over the intervening century into today’s annual Lawn Supper, a church fundraising and community fellowship event – usually in the second half of June, on the lawn of the rectory.

St. John’s celebrated its Centennial in 1940 and underwent extensive repairs and renovations in the late 1950s.

In 1958, a basement was excavated under the church so that a new oil furnace could be installed – a major improvement over an ancient wood furnace that was quite insufficient on winter’s coldest days. The excavation was not a feat of sophisticated construction techniques by any modern standards! Parishioners and their helpers did it all by hand. Apparently everyone helped out, including the local sheriff and his sons. Shovels were used to dig out the basement and earth was placed in buckets to be pulled up by rope through a hole in the floor.

Up to and including most of the 1960s, Sunday School at St. John's was held in the old March Township municipal hall a few hundred metres away on March Road. Then, in the late 1960s (in a period of rapid new subdivision growth in the neighbourhood), after much congregational debate, it was decided the time had come to add a hall to the church proper for Sunday School, social and other church meeting uses. This new kitchen-equipped structure just behind the church building was dedicated in September 1969.

Expansion and accessibility in 1991

In 1992, a newly expanded church hall was dedicated by Archbishop Edwin Lackey. The expansion included a new entrance and narthex to make St. John’s accessible. It also included office space and a modestly expanded kitchen.

Time passed and, as the surrounding area had continued to experience both a late-1990s employment boom in the Kanata high-tech sector and accelerating growth in the building of residential subdivisions, more and more new parishioners were joining St. John’s. So, 36 years after the original hall structure had been finished, congregational approval was given at a special vestry meeting in February 2005 to significantly expand, modernize and improve the St. John’ s parish hall complex.

The 1969 hall was virtually doubled in size on both upper and lower levels. The church and hall complex now includes expanded storage space, a choir room, two additional washrooms, a small second clergy office, a much improved kitchen, a ramp for accessibility, and more downstairs space for the school. The better than half a million dollars' worth of renovation and expansion work carried out in the second half of 2005 also included the installation of air conditioning for the upper hall level, and improvements to heating, fresh water and sewage-handling systems.

Changes to the interior of St. John’s

Around 2003, St. John’s Renewal Program significantly altered the sanctuary. The rood screen was removed to reduce the separation of the chancel from the nave. The altar was moved out from the wall in order to allow the priest to face the congregation during the celebration of the Holy Eucharist. The steps into the chancel were removed, and the altar rail was moved toward the nave and became accessible, with the elimination of three steps. The interior of the church was redecorated with a new colour scheme and carpeting. A memorial book and wall were created to properly preserve the details of memorial donations received throughout the years.

Still, though, 180+ years after opening, our original church building looks virtually the same from the exterior – a simple and unpretentious rectangular building with its original exterior walls of locally quarried stone still standing proudly as an eye-pleasing monument to the faithful newcomers who built it.

Clergy serving the Parish of March

There is a long list of members of the clergy who have ministered at St. John's. However, perhaps a unique circumstance occurred over the course of forty-two years, when the Parish was served by only two rectors: the Rev. Edward C. Attwell (1965-1988) and the Rev. David J. Clunie (1988-2008).

Our Rector since 2021 is the Reverend Dr. Jonathon Martin.

Much more information is available from:

Much of the information about events prior to the 1990s presented here has been taken from A History of St. John's Anglican Church, South March 1839-1989 by Shirley Hendry, with acknowledgment hereby gratefully extended to its author.

We also acknowledge the assistance of further notes supplied to us for this short history by longtime parishioner Juanita Snelgrove, a descendant of Hamnett Pinhey.

We also acknowledge the incredible resources that are the Anglican Diocese of Ottawa Archives and its Archivists, present and past, Dr. Glenn J Lockwood, and Mr. Jack P. Francis, respectively.